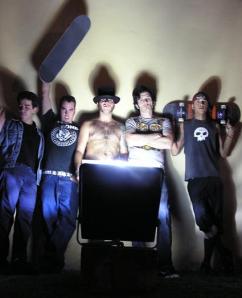 on April 2nd 2005 at Mayaguez Café in Puerto Rico.FY=Forgotten Youth and

BS=Ah,we were kids in high school ;Actually we grew up together

and then some time around high school,we just started playing

all about hanging out,and “ what are we going to do? I don’t know ,

lets skate..All right ,that’s cool ..What you wanna do know? I don’t

know, Lets jam”.Its just a matter of hanging out with your friends.

FY=What are your influences as a band?

punk rock change my life as a little kid.And since then,since playing

music for a living ,its all I’ve done since my entire adult life, for like

17 years.Its like you just keep learning more about music..I think

roll,punk rock is a form of rock n roll.If you love it that much ,you

live with it and you live for it and it takes you deeper into itself.I

don’t know I listen to all kinds of rock n roll now,mostly I like classic

FY=What is the Bouncing Souls best show ever?

they were the best show ever and then the next day ,it was a new day

and it was created again,you know.

FY=And this is part of this question ,the worst show?

to moment.You could be like completely terrorize for a split second

and then be completely elated the next.All during the show,that’s

FY=What do you do besides playing in the Bouncing Souls?

BS=Ah,I love motorcycles.I ride my bike.I drive a Harley and I ride it

California.I like to go out to the dessert and hang out.

,you can really have a favorite….I don’t have kids , I have records.(laughs)

FY=Five classic albums everybody should own?

BS=I don’t know ,I think Johnny Cash would have to be in there.I don’t know

man,its really hard to say.I get rush with too many answers..If I told you five,

I’ll be leaving so much good shit, it will be the wrong answer.I can’t answer that,

I would say this : This band that you are hearing right now , they’re called

The Hole Steady , lookout for them ,they are a fucking awesome band. They are my

new discovery,I love this band so much.

BS=They are from Brookyln,our soundman Bob ,he has a studio in Brooklyn and he

BS=(laughs) You know , a mullet with a flat-top. It combines ths best of both worlds.

FY=What are your favorite bands growing up?

BS=Black Flag was probably my first favorite, Dead Kennedys , I loved the Plasmatics,

awesome record. Kind of broad in my horizons.Then you got like Age of Quarrel by

BS=AOD,sure.We use to play with AOD,man…Misfits ,they were one of the greatest

bands that ever was.

Man.Bruce Springsteen ,he’s had a couple of cheesy moments,you know.In the 70s..

FY=He use to hang out with Handsome Dick Manitoba from The Dictators..

BS=Yeah,he’s a friend of mine.,Dick Manitoba. I lived around the corner from Manitoba’s

how cool Bruce Springsteen was.In the 70s,people need to listen to records like

Born to Run and you’ll see, greater punk lyrics were never written in some of the songs

that he wrote..We cover “Growing Up”.

FY=It appears in The Bad ,The Worse and The Out of Print?

BS=No,unfortunately we can’t afford to pay the royalties for the cover of it. But at the

same time we are friends with Max Weinberg, whos the drummer of The E-Street Band.

And I met Little Stevie too, at Manitoba’s Bar actually.And when we go back home in

New Jersey ,we are gonna play a show in New Jersey in Ausbury Park and Max Weinberg

is going to play drums for us and will cover “Growing Up”.Its going to be a very Jersey

BS=Oh, it’s a tough question because all kind of shit happens everyday.Everyday we have

a different story,you know. Like 15 years of tour, I couldn’t just pick out a good one because

they are so many.The thing about tours is just like,something’s always happening.We came

to Puerto Rico ,that’s the latest thing.Bob bought a $12 dollar boat at Walgreens. A little

inflatable boat and when we went out and play pirates on the ocean, totally drunk and wasted.

“we steal all women” and we took her out in our little boat.And we brought the boat tonight

And we are going to try to “crowd sail it” ; its like crowd surfing but in a boat.

know.So does New York cause there is where I live personally,so that’s my hometown.

Ah,I think every place is a different feeling ,and no one is better than the other .Its like,

Rico.You know,everything has something special about it.The weather sucks in the UK

but we love playing in London,you know,things are different everywhere.

FY=Future plans of the Bouncing Souls?

BS=We are going to go home and write songs and take it from there.Eventually ,probably

put out a Bouncing Souls record.

FY=Any message to your loyal fans around the world? Maybe in Puerto Rico?

This site uses Akismet to reduce spam. Learn how your comment data is processed.